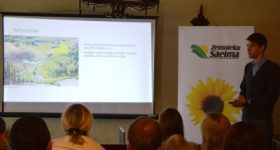 On Friday, March 4th the project “NUTRINFLOW” introduction meeting took place in Jelgava’s municipality. The participants were presented with the possibilities to lower the negative effect of agriculture on environment. The meeting was organized within the frameworks of Central Baltic Programme’s project “NUTRINFLOW”. The project is implemented jointly by union “Farmers Parliament”, Zemgales Planning region, Jelgavas County Council and Latvia University of Agriculture in collaboration with foreign partners.

During the meeting Zanda Melnalksne, union’s “Farmers Parliament” head of office introduced the project and the relevant legislative requirements. Expert Mārtiņš Cēsnieks and farmer Juris Cīrulis talked about the possible environment-friendly requirements, as well as practical melioration system examples. Whereas Tālis Tīsenhohs from the Baltic Study Centre’s encouraged the participants in a discussion about the promotion of collaboration between farmers, municipalities and other involved parties. After the presentations the participants gave their recommendations on environment-friendly element implementation, collaboration improvement and project goal achievement.

While involving local farmers and public, project “NUTRINFLOW” aims to organize different studies, meetings, discussions and other informative events, to promote a joint effort to look for the most effective and simultaneously most economically justified environmental risk reduction solutions for Ailes stream basin. At the same time project experts, in collaboration with farmers, will install three technology/method demonstrations, where in Latvian circumstances the economic efficiency of specific elements (such as, two-stage ditch, wetlands etc) will be tested.

About project “NUTRINFLOW”
The project “NUTRINFLOW” aims at reducing nutrient losses from agriculture to the immediate watershed and into the Baltic Sea. The project duration is from September 2015 till February 2019 and it is implemented by Central-Baltic Program 2014-2020. The idea is to take practical actions for holistic drainage management for reduced nutrient inflow to the sea. This is done by implementing, demonstrating and increasing the recognition of innovative water management measures in agricultural areas.

About union “Farmers Parliament”
Farmers Parliament (ZSA) is a member organization / industry association for farmers in Latvia. The Union was begun by 134 farmers in 1999 to ensure that the commercial farmers of Latvia are represented in communication with the government. The organization has grown ever since and has become the largest farmers’ organization in Latvia and one of the most influential unions in the country, reaching nearly 900 members, who together produce more than half of Latvian total agriculture produce. Farmers Parliament negotiates with the government and national organizations and institutions on behalf of Latvian farmers, as well as represents Latvian farmers’ interests at European Union level being a member in European Farmers umbrella organization COPA/COGECA